As Ramming’s guns were thundering at Nachod, twenty kilometres to the west at Trautenau (now Trutnov), by 10: 00 a.m. on the morning of the 27th June, General Adolf von Bonin’s advanced guard of his I Corps of the Prussian 2nd Army were already through the pass there and inside the town itself.

Cognisant with Benedek’s orders, the Austrian X Corps had been rapidly moving to block the pass at Trautenau and the leading brigade under Colonel Fredrich Mondel was, by 7:30 a.m., already ensconced on the high ground in front of the town, giving the Prussians a warm welcome in lead as they were catching their breath in the town square. Quickly gathering themselves together, the Prussians began to return fire, Mondel’s troops falling back to high ground in good order to await the arrival of the rest of their corps.

The commander of the Austrian X Corps was the 51 year old charismatic and talented Lieutenant Field Marshal Ludwig von Gablenz, whose appearance in his middle years was rather akin to how the actor Trevor Howard looked when he played the role of Lord Cardigan in the 1960’s film, The Charge of the Light Brigade, with his mutton – chop sideburns, handlebar moustache and receding hair line.

Gablenz was all soldier, who had the respect of both the officers and men serving under him. His one failing, which was a trait common to many general officers the world over during the nineteenth and twentieth century, was that he was willing to sacrifice lives to obtain his objectives. His military talent was far superior to his financial acumen and he went spectacularly bankrupt in 1873. Deep in debt and worried that he would lose the Emperor’s confidence, he committing suicide in Zurich, Switzerland in 1874.

His opponent at Trautenau was the slow and unenterprising General Adolf von Bonin, a 62 year old who had no particular aptitude for warfare, and only achieved his position as a corps commander due mainly to various postings as aide de camp to the Prussian monarchy. His performance during the war of 1866 caused von Moltke to consider him as incompetent, and consequently he saw no active service in the Franco – Prussian War. He died in Berlin in 1871.

Bonin’s orders were, once Trautenau was firmly in Prussian hands, to drive ahead towards Pilnikau and their attempt to make contact with the advanced elements of Prince Frederick Charles’s 1st Army. Showing a total lack of topographical understanding Bonin pushed on towards his objective, without bothering to secure three prominent hills on his left flank – the Galgenberg, the Johannesberg (Kapellenberg) and the Hopfenberg. Here Mondel’s brigade brought the Prussian advance to a halt, with prolonged and bitter fighting taking place around the chapel on the summit of the Johannesberg, until finally the Austrians were forced to relinquish all three hills and were pushed back through Hohenbruck to the village of Alt – Rognitz. At 3:00 p.m., the firing died down and Bonin considering that Trautenau and the hills dominating the terrain were now secured and began bringing up the remainder of his I Corps and ordering the commencement of the advance, even informing an adjutant of the 1st Guard Division who had ridden from Eipel to inquire if Bonin was in any need of help that he was sure that he had now dealt with any threat from the Austrians – to have underestimated the resolve and determination of a commander of Gablenz’s ability would not go unpunished. 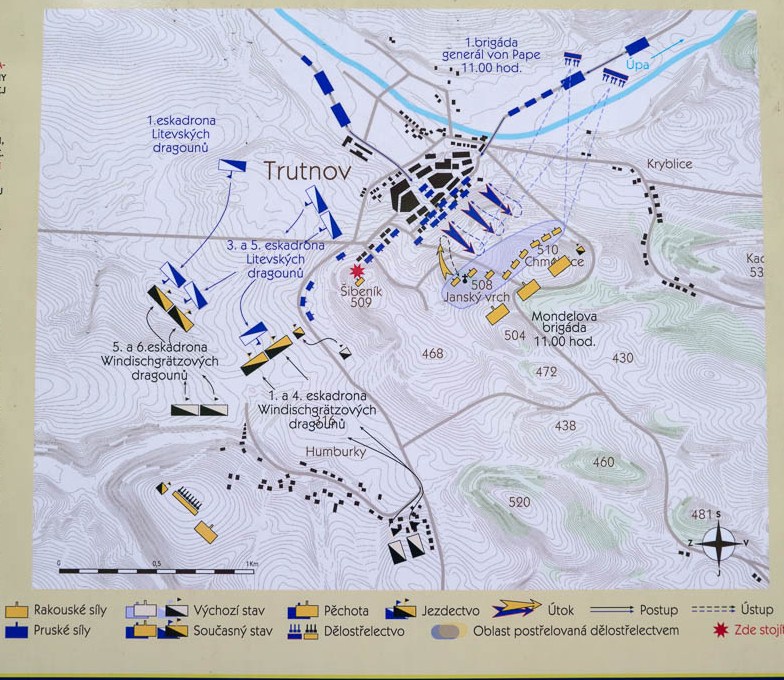 Plan taken from one of the information boards on the battlefield showing the action at 11:00 a.m.

Gablenz had arrived on the field at 10:00 a.m. but his other units were still hurrying forward from Josephstadt, and it was not until 2:30 p.m. that the brigades of Colonel Grivicic and Major General Wimpffen began to form for battle. With his sharp eye for topographic detail Gablenz saw that once the three prominent heights of the Galgenberg, the Johannesberg and the Hopfenberg were taken he would be able dominate the low ground around Trautenau with his artillery, causing the Prussians to be forced back through the mountain pass. At 3:00 p.m. he ordered Wimpffen to attack the Johannesberg, while Grivicic brigade moved around the Prussian left flank to attack the Hopfenberg, Mondel’s brigade moving to gain the Galgenberg. Deploying his artillery in a massed battery at Hohenbruck, Gablenz smothered the hillsides with gunfire in preparation for these assaults.

The combination of frontal and flanking attacks, albeit at great cost the needle gun mowing down the Austrian tight packed storm column’s, started to tell and with the arrival of Brigade Knebel Prussian resistance began to crack. Before he was completely trapped, Bonin ordered a retreat, not just from the stricken field, but all the way back to the other side of the mountains as far as their original stating place of the previous day.

Even though Trautenau was a victory for the Austrians, indeed the only one attained in the Bohemian campaign, it was no more than a Pyrrhic victory. The Prussians had suffered 244 killed, 1,008 wounded and 86 missing, while Gablenz’s losses totalled 5,782. The casualties being so great that no follow up of the retreating Prussians was undertaken. A somewhat spiteful criticism of Gablenz’s failure to keep up the pressure comes from the Prussian Official History, which states:

He was unwilling to run the risk of compromising, by a fresh undertaking, the success he had already obtained. This determination had a decisive influence on the subsequent operations, although in other points the fortune of war had been in favour of the Austrians. [1]From the German edition of the Official History. Quoted in Barry. Quintin, The Road to Königgrätz, Helmuth von Moltke and the Austro – Prussian War 1866, page 253.

Gablenz was not the type of soldier who was “unwilling to run the risk of compromise.” The fact was that, after marching and fighting, virtually without a break for almost fifteen hours, plus the losses sustained in battle, his brigades were worn out and in no fit shape to undertake a rapid follow up.

Wawro. Geoffrey, The Austo – Prussian War, Austria’s War with Prussia and Italy in 1866.

Craig. Gordon A, The Battle of Königgrätz.

Each brigade had one squadron of the 1st Uhlan Regiment attached and one 4 – pounder Field Battery.

Like Nachod, the battlefield of Trautenau (Trutnov) has well marked trails and some wonderful views from the hill tops surrounding the town. In particular the trail passing through the town park and climbing up to the Austrian X Corps monument and Gablenz’s grave is very pleasurable, Dr Bob and myself just missing a thunderstorm that rolled across the mountains. From the monument you can take the leafy trail on towards the chapel which sits among trees on the summit of the Kappellenberg. Here there are several graves of Austrian and Prussian field offices dotted around the edge of the chapel, which was the scene of much bloody fighting on June 27th.