Still on the Swiss theme for this article I thought readers would like to know about one of the finest examples of panorama painting still in existence and housed in a special museum in the town of Lucerne.

During the late nineteenth and early twentieth century military panorama paintings became a popular form of visual representation of what took place on various famous battlefields around the world. Most of these depicted action scenes taken from some important event that occurred during the course of a battle, the Waterloo, Gettysburg and Borodino panoramas are fine examples of this style. It has been said that some form of agreement had been arranged so that these panoramas could be interchangeable, however, even allowing for many of them being constructed using roughly the same dimensions (with the exception of Gettysburg) of around 115 meters in circumference by 15 meters high, there is no firm evidence of any such undertaking having taken place?

For an interactive view of the panorama please follow this link.

The Bourbaki panorama was painted in 1881 by the Swiss artist Edouard Castres (1838-1902) with collaboration from a team of other painters who dealt with such things as filling-in and completing details here and there. The original canvas measured 114 meters in circumference by 14 meters high, but in 1926 the ground floor of the rotunda building housing it was turned over for use as a commercial enterprise having had two meters cut from the top of the panorama to accommodate these alterations. Once again in 1949 yet another two meters were taken off the top to allow for more space being available on the ground floor and today the panorama is only ten meters or so high. The site was completely renovated between 1992 and 2003 and the painting repaired. 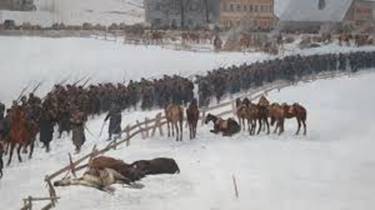 The painting itself depicts the French Army of the East crossing over the Swiss border at Les Verriéres, a village in the Canton of Neuchâtel, after being forced back into Switzerland by constant pressure from the Prussian forces closing in to surround it. The painting is known as the Bourbaki panorama after the commander of the French Army of the East, a hastily raised and trained force of some 150,000 which had been formed to break the siege of Belfort. After an initial success at Villersexel on the Ognou river, the French were defeated in a three-day battle on the Lisaine, a small stream that flows from the Vosges mountains just north-west of Belfort. Thereafter, at the beginning of February 1871, Bourbaki army crossed the Swiss frontier, his forces depleted to around 87,000 cold, hungry and worn-out men together with 12,000 half-starved horses. Having crossed the border, the Swiss authorities disarmed them and held them in detention camps for six weeks until they were repatriated in March. 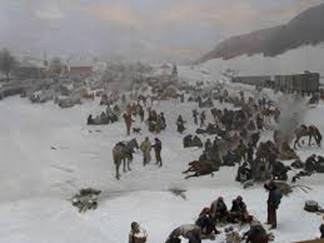 What Castres shows us is the ragged columns of French soldiers crossing the border and depositing their equipment on the snow-covered fields around the railway line at Verriéres. The illusion of depth drawing the eye of the viewer into the painting by the use of artificial terrain and 21 life size mannequin dolls, plus actual equipment scattered across the terrain, which also includes a full-size railway truck. 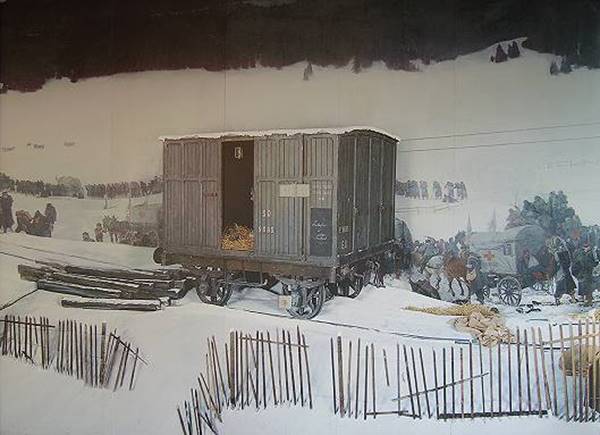 Castres himself was an actual participant in this event. When the Franco-Prussian War broke out in 1870 he volunteered to become a Red Cross helper, an organization which had only been established for just over ten years by the Swiss businessman and humanitarian, Henry Dunant after his experience of seeing the aftermath of the battle of Solferino in 1859. Although most of the major European countries had signed the Geneva Convention, which established international standards for the humanitarian treatment in time of war, many of the armies were only just forming their medical services to adapt to these standards. Therefore, the event depicted by Castres departs from the classic examples of panorama painting in not showing sweeping scenes from glorious fields of battle, and instead portrays the role of neutral Switzerland and the Red Cross pointing the way towards a more compassionate and humanitarian approach to the reality of warfare. 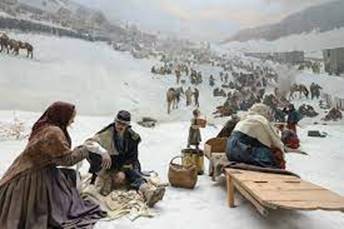 2021 marks the one hundred and fiftieth anniversary of the event portrayed in Castres panorama, which has been marred unfortunately by the restrictions imposed by the Covid virus. However, it is planned to keep the exhibition “Crossing Boundaries” on the site until late 2022. 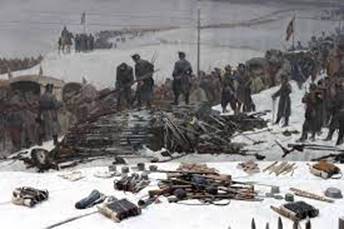 Finally, being a military history site, I cannot leave out some details concerning the character and career of the man whose name has become synonymous with the panorama- Bourbaki. 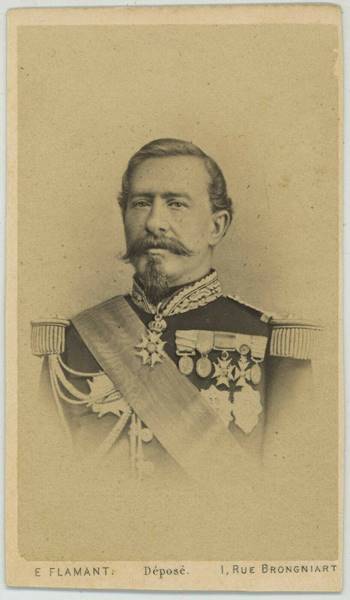 Born in Pau, southwestern France in 1816, Charles-Denis Bourbaki was the son of a Greek colonel who was beheaded by the Ottomans during the Greek War of Independence in 1827. His education was military from the start being first at the Prytanée National Militaire and the at the École spéciale Militaire de saint-Cyr.  After serving as a lieutenant with a Zouave regiment in the Foreign Legion he became aide-de-camp to King Louis Philippe in 1838. He became a captain in the Zouave’s in 1842 and then a colonel of the Tirailleurs Algerine, or Turcos, in 1850. Rising to brigadier-general in 1854 he commanded Algerian troops during the Crimean War, gaining distinction at the battles of the Alma, Inkerman and at the siege of Sevastopol. He was a general of division in 1859 making himself famous for his conduct during the war against Austria during the Italian campaign. Thereafter he was offered the vacant throne of Greece but declined, later to become commander of Napoleon III Imperial Guard in 1870. His poor showing during the Franco-Prussian War (1870-1871) was to throw doubt on his ability to reach firm decisions under adverse circumstances (see my article on the battle of Gravelotte-Saint Privat on this site).

Considering it degrading and humiliating, Bourbaki attempted suicide rather than surrendering to the Prussians at the Swiss frontier, however, after firing a pistol at his forehead, the bullet failed to penetrate his skull and he was thereafter carried over the border into Switzerland.

After the war he became military governor of Lyon and was placed on the retired list in 1881. He died in September 1897 at Cambo-Les-Bains in the Basque province of Labord. Although he proved himself a brave soldier, he lacked the ability to command at high level.